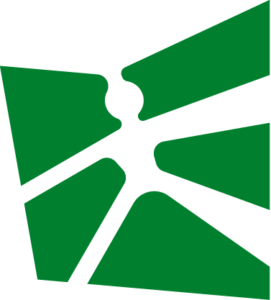 The Financial Motivation Behind the Super League Attempt

The Financial Motivation Behind the Super League Attempt

Twelve top European clubs from England, Italy and Spain planned their own Super League, in which only the 15 founding members plus five other clubs would be eligible to participate. According to the Super League’s announcement, the founding clubs will split €3.5 billion for signing on to establish “a sustainable financial foundation“. The per-team figure means each founding club will receive more than four times what the Champions League winner took home in 2020. However, the reasons why the clubs wanted to join this new league were manifold.

The Covid-19 crisis has hit the football industry hard. For more than a year now, games have largely been played in empty stadiums and clubs have had to cope with high declines in revenue. While revenues are declining, clubs have to deal with high fixed costs (mainly consisting of player sala-ries), which can hardly be reduced to the same extent. As a result, many football clubs are currently facing high losses. While reporting losses is not a major problem per se – especially if they are triggered by an exogenous shock and the business model itself is stable – the situation becomes critical when companies were already operating at their financial limits before the Covid-19 crisis and thus cannot bear losses. This is where equity comes into play. If companies have a high equity ratio, they are able to absorb losses on the balance sheet and can obtain bridging loans from banks even in financially difficult times, as they are perceived as a safe counterparty.

However, companies that already did not have a solid financial structure before the Covid-19 crisis, rarely retained profits and always operated with low equity are currently facing severe problems. Due to the low level of security, it is difficult for these companies to borrow additional money, and in the event of losses they will quickly slide into negative equity and thus into over-indebtedness. Hence, it is interesting to take a look at the 2020 equity ratios of the twelve founding members of the Super League, also including FC Bayern Munich and Borussia Dortmund, which decided not to participate in the league, as a benchmark: 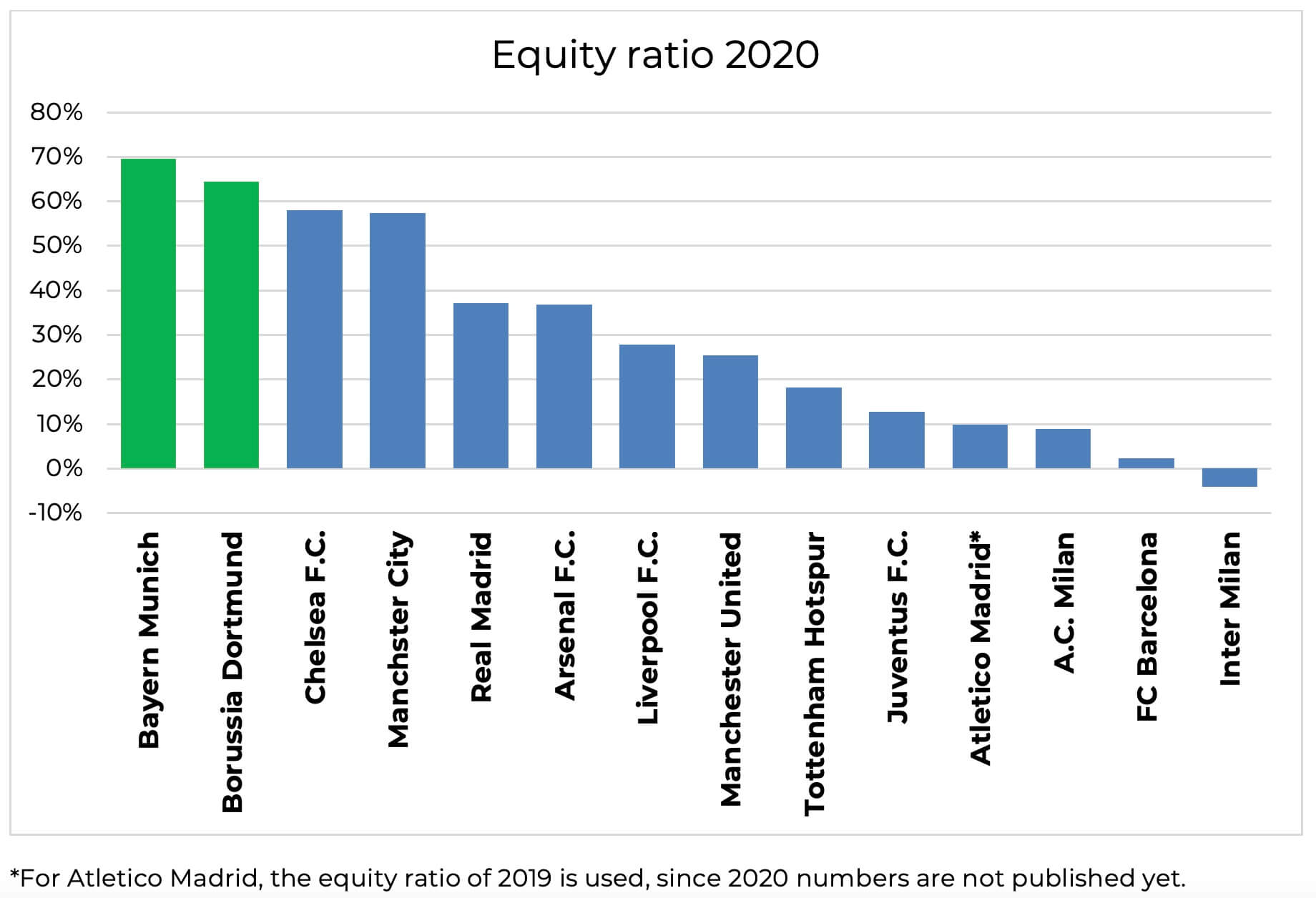 Based on this brief financial analysis, it is possible to identify three clusters of clubs representing different motives to join a pan-European Super League:

As the calculations show, the six Premier League clubs all have a fairly solid equity base and thus should be able to bear the losses of the Covid-19 crisis. This is not surprising, as the Premier League clubs are all in the hands of financially potent owners who have invested a considerable amount of capital in the respective clubs. This is particularly evident in the two examples of Chelsea F.C. and Manchester City. Both have a very healthy equity ratio, which is, however, only the result of the high capital investment of their investors. Chelsea F.C. reported accumulated total losses of £774 million in 2020. Yet, since the owners have invested a total of £1.3 billion, equity still remains highly positive. The balance sheet of Manchester City looks similar: accumulated losses amounted to £730 million in 2020, while equity investments by the owners were also up to £1.3 billion. Hence, none of the Premier League clubs are forced to participate in a Super League due to severe financial pressure. However, investors such as the Fenway Sports Group (Liverpool F.C.), the ENIC Group (Tottenham Hotspur), the Glazer family (Manchester United) or Stan Kroenke (Arsenal F.C.) are extremely profit-driven. If a newly formed Super League can generate high profits and thus a large return on investment, from the investors’ point of view there are very few arguments against a participation. Additionally, only four out of the six Premier League clubs that intended to form the Super League can currently participate in the Champions League. A closed Super League would guarantee constant participation (and associated revenue streams) for all six clubs.

The second cluster consists of only one club: Real Madrid. Real Madrid is neither in acute financial distress, nor is it owned by a yield-oriented investor. Contrary to frequent rumors, Real Madrid is not (anymore) the „Spanish debt club“, but has been managed very rationally in recent years and built up a solid equity base. Moreover, Real Madrid is organized as a sports association and is therefore not owned by investors. Yet, Real Madrid’s president Florentino Pérez claims that founding a Super League was crucial to “save football” and that without it, all clubs would be dead by 2024. This claim is simply wrong. As it can be seen by the graph above, most clubs (including Real Madrid) should be able to deal with the current losses and most likely will also survive the Covid-19 crisis. What is true is that Real Madrid would have to file for bankruptcy if they did not adapt to the new financial situation, kept their player salaries as high as they currently are and did not reduce the transfer fees spend in the future. But with reasonable financial policies in place, there is no danger for Real Madrid to go bankrupt.

Cluster 3: The Other Spanish and Italian Clubs

For all other clubs from Italy and Spain, a Super League would be an urgently needed lifeline to financial recovery. Juventus F.C. currently reports an equity ratio of just 12% and has been facing constant losses for years, even before the Covid-19 crisis. In the 2018/19 season, a loss of around €40 million was generated, in 2019/20 the loss was nearly €90 million. In the first half of the 2020/21 season, Juventus F.C. already published a loss of €114 million. Without constant capital increases, the club would have been over-indebted long ago. The business model is financially unsustainable and cannot be sustained in the long term. Atletico Madrid already reported an equity ratio of only 10% before the Covid-19 crisis in 2019. These reserves are now likely to be depleted, leaving the club in urgent need of capital. The situation is similar at FC Barcelona, which entered the crisis with just under 10% equity and was already close to over-indebtedness before the start of the 2020/21 season, reporting an equity ratio of only 2%. Inter Milan was even over-indebted on its balance sheet as early as 2020 and reported negative equity in the amount of €-37 million. All these clubs desperately need a Super League with enormously high and guaranteed revenues for their financial recovery.

What can we learn from this?

Florentino Pérez is wrong to claim that founding a Super League is the only way to save football. What he actually meant is that founding a Super League is the only way to help Real Madrid to keep their player salaries high and to continue to buy the best football players for everlasting record-breaking transfer fees in the future. The Premier League clubs do not need the Super League to survive financially, but due to profit-driven investors, it would be an interesting project profit-wise. Real Madrid also does not need it if they reduce their spending and accept that they cannot acquire any player they would like to. What is true is that Juventus F.C., Atletico Madrid, A.C. Milan, FC Barcelona and Inter Milan are in severe financial situations, caused by spending too much money already before the Covid-19 crisis. Without a Super League, they will have to sell players and lower their costs if they want to survive.
For the German clubs, there is no pressure to participate in a Super League at all. Bayern Munich as well as Borussia Dortmund report the highest equity ratios of the European top clubs and can easily survive the Covid-19 crisis thanks to their own reserves, even though they are not controlled by investors. Both clubs have consistently retained profits in the past and thus significantly strengthened their equity base. Furthermore, both clubs are majority-owned by their members and not by profit-oriented investors that demand a higher return on investment. 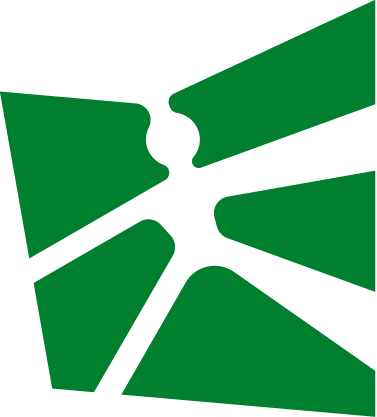